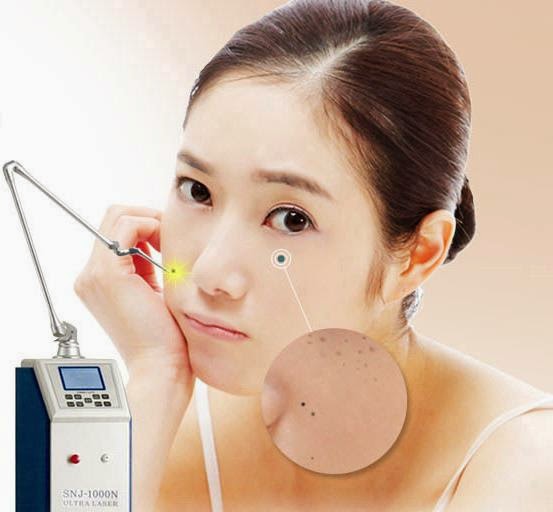 So, I have a few moles on my face. About 5, to be exact. And those are just the real obvious ones - on bad days, my face can be a total mess. To be honest, my moles don't really bother me, since they'd been around forever and I'm just so used to them. I consider the one under my mouth a beauty mark, and I've been told it means I eat well... which I'm only too happy to accept as truth. Because, er... it can also mean that I won't starve to death or anything, right?

There were a couple of embarrassing moments, though. When I was very little, eating noodles (jjajangmyeon) with my brother, he looked up from his plate and told me I had some sauce on my face. It was a very dark brown sauce, very easy to get messy when eating. I wiped my face but he said it was still there. Being the self-conscious girl I was, I rushed to the mirror and saw that my face was actually clean, but he had seen the mole and took it for sauce. I scolded him for being an idiot and not knowing that his own sister had a mole in that exact area, but my parents thought it was hilarious and still tease me about it today.

Similar story, from just a few years ago: I was eating Nutella crepes with a kind and considerate friend who thought there was some chocolate on my face. Remembering the sauce incident, I told her it was probably my mole, but before I could stop her she reached over with a napkin and tried to wipe it off for me. After which, of course, she got super embarrassed and I had another good laugh recalling my childhood story.

Anyway, mole removal is pretty easy these days. Such a simple procedure; a short laser session is all you need and the price is not so ridiculous either. Of course, if it's a bigger mole, you might need more than one session, but it still does not take up so much of your time. I've been meaning to get mine removed for years but by now I think I'm just too lazy and don't notice my moles anymore.

If you're considering getting your moles lasered off, now is actually a good time to do it. By now, I mean wintertime, when the temperature is much cooler and skin heals better. Less risk of infection, less exposure to sunlight (which should be avoided for a while), and less exposure to water or sweat (which should also be avoided). The procedure is quite safe, if you're worried at all. As long as the doctor is careful and doesn't overdo it - which is always the case - there will be no scarring involved.

Stop by for some super-quick lunchtime treatment! Clearing your face of moles can actually make a pretty big difference; I feel this every time I use concealer and see myself temporarily free of pigmentation, or what seems like free, anyway. Don't stay messy and lazy like me! You deserve to be beautiful. ;-)